so i had a random urge for crazy food-related delight this afternoon, on my hour-and-a-half drive home from pacifica*. i recently found, via tastespotting, recipes for fried oatmeal chicken and pumpkin mash. the page in question was an exercise in de-health-ifying an existing set of recipes, and believe you me, it sounds pretty freaking awesome. however, i’ve been trying to pay attention to what i stuff in my facehole, and the thought of frying chicken in pure butter was slightly repellent to me. so, i stopped at the store, and then i improvised, via baked oatmeal chicken and pumpkin polenta.

it was pretty amazingly delicious considering i was basically winging it; the milk needed egg to really make the oatmeal stick, and i probably should’ve run about half of the oatmeal through the food processor to make a really nice coating. but the oven maintained 350 degrees fahrenheit**, and the polenta soaked up the pumpkin like a champ. well, half of the pumpkin.

see, the smallest size can of pumpkin puree one can get with regularity at their local supermarket is 15 ounces, the size of a slightly-large soup can. i only needed half the can for dinner, and whilst i took a couple bites of puree straight from the can, i craved more.

enter cook’s illustrated recipe for simple stove top rice pudding, tweaked and adapted to complete shit because i’m impatient and didn’t want to use two cups of any dairy product. because we were running low. however, my bastardization was the real winner this evening:

i give you, pumpkin pie rice pudding.

bring 1 cup of water to a boil. stir in rice and salt; reduce heat to low and simmer, covered, until water is absorbed, about 15 minutes.

stir in milk and 1 cup water; the sugar; the spices; the extract; and the half can of pumpkin puree. bring to medium heat, stirring frequently until thick. reduce to low heat to continue the magical thickening process, stirring occasionally so it doesn’t stick to the bottom of the pan.

you could, of course, let it chill in the fridge, and then top it with freshly-made whipped cream and some more cinnamon. or, you could be real damn impatient like me, and let it fall to just below taste-bud-slaughtering heat before consuming it like the animal you are. i am. we are. IT TASTES LIKE PUMPKIN PIE, ALL RIGHT? 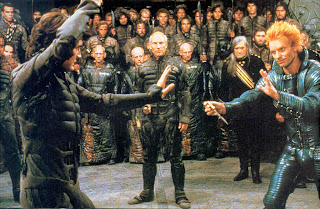 *i almost stopped a few times–the weather was perfect, the sea was exquisite… ugh.

**which was twenty-five degrees lower than i wanted, but the fact that it maintained any temperature below 425 is a victory to me.